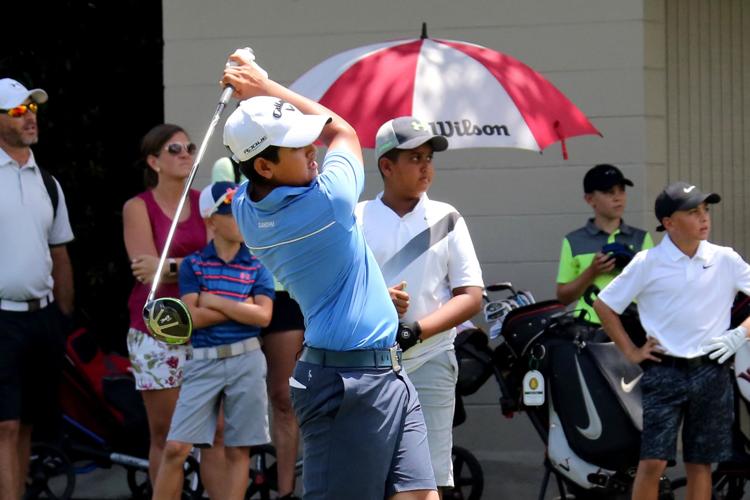 Sihan Sandhu, the defending champion in the 11-12 age division, did nothing to hurt his chances for a repeat when the Press Thornton Future Masters began on Sunday.

Sandhu of Ashburn, Va., and Asher Joseph of Melbourne, Fla., both opened the tournament with a 3-under-par 67 to pace a deep, talented leaderboard. There are 25 other golfers within five shots of the lead.

“I actually played really solid today,” Sandhu said. “I gave myself good chances on a lot of holes. I only missed five fairways.”

Joseph said his 67 was due to his short game, apart from his putter.

“I hit some good wedge shots really close,” Joseph said. “My putting was pretty good, but if it had been better I could have shot 64, 65. I can hit some more fairways, but I made it up with the wedges.”

They are one shot ahead of John Daniel Culbreth of Thomasville, Ga., who didn’t need to think about the highlights of his round. They came on back-to-back holes at the start of the back nine. He holed out for eagle at No. 10 and rolled in a 30-footer for birdie on No. 11 to turn around a 2-over score after nine holes.

“I holed out from 50 yards – pretty cool,” Culbreth said. “The back is so much easier. I think it’s about a three- or four-shot difference, at least.”

After the top three, five golfers were at 1-under 69 and five more were even.

At even-par 70 were Shawn Coultoff of Winter Garden, Fla., Alex Long of Toronto, Ontario, Krostoffer Kuvaas of Houston, Jackson Herrington of Franklin, Tenn., and Billy Abdow of Duluth, Ga. Abdow played in the final group, which teed off at 1:55 p.m. Bade was in the penultimate group, which started at 1:46 p.m.

Bade said he chipped in from a divot at No. 3.

“Which was kind of lucky, but gave me a bonus of confidence,” he said, adding he made birdie putts at No. 5 and No. 7.

He turned the front in 33 before things got adventurous on the back.

“I shanked my tee shot on 11, made double, and got those shots back with birdies on two holes,” Bade said. “I birdied another hole and made another double at 16, which took me down. I pulled my drive and it kicked off a tree out of bounds.”

He played very well on the front, too, except for a disastrous 8 on the par-5 No. 4.

“I hit a drive right, hit a tree and came down,” he began. “I actually had a good look out of mulch, but I pulled that shot into the trees and just had to punch out right of the green. I’m hitting my fourth there.

“I tried to hit a flop shot over the bunker and got under it and put it in the bunker – and it plugged in the lip. So I had to hit that shot and it barely got out. I got too aggressive on the chip and ran it by long and took two putts.”

However, he bounced back on the next hole, driving into a bunker on the par-3 No. 5 but getting up and down for par.

Mann was thrilled with his 69 to start the tournament. He said nerves got the best of him and he bogeyed No. 1, but bounced back with eight straight pars. He bogeyed No. 10, but again came back.

“I had two birdies in a row after that and made one at No. 14 that just lipped in at the last second from 30 feet,” he said. “My goal was to make the cut. Now it’s to shoot two more solid rounds.”

Fearsome Foursome: The 12:16 p.m. pairing of William Jennings, Asher Joseph, Frank Kennedy and John Brady Knight achieved a rarity. Each of them played their first nine holes – they started on hole No. 10 on Sunday – under par.

Joseph is the co-leader at 3-under. Jennings is tied for fourth after a 69.

“I think it helps to see good shots,” Joseph said.

Solid start for Crowder: Mason Crowder of Dothan got off to a good start in the 11-12 division. He fired a 3-over 73 that he hoped would be better until a bogey-bogey finish.

“That kind of frustrated me. I wanted to go par-par to finish it,” Crowder said. “But it’s fine. It’s a 73. It’s a really good score. It’s one of my better rounds.”

He turned in 2-over after the front nine, but hit irons close to No. 10 (five feet) and No. 14 (seven feet) and knocked down the birdie putts.

“I was just hitting them close,” he explained. “I was nervous. It’s a big tournament and there’s a lot of good players out there.”

Hello again: Sahish Reddy and Sam Udovich, players in the 10-under and 11-12 age groups, respectively, exchanged greetings on Sunday. They hadn’t seen each other since they competed at Augusta National Golf Club in April at the Drive, Chip & Putt Championship, which kicked off Masters week.

There are at least seven competitors this week who were finalists in the skills competition at Augusta. Luke Parsons of South Carolina and Reddy of Atlanta are competing in the 10-under; Udovich of St. Paul, Minn., Nicholas Goss of Downingtown, Pa., Patmon Malcom of Alpharetta, Ga., and Thomas “Tip” Price of Greenville, S.C., are in the 11-12 age group; and David Wu of Winter Garden, Fla., is in the 13-14 division.