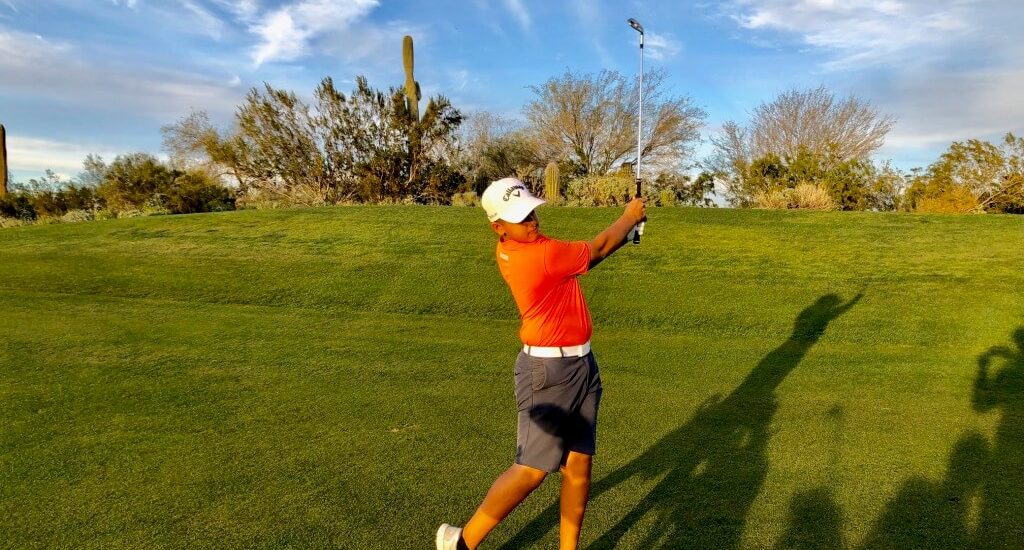 Zaccheo’s six birdies propelled him to a 4-under par 66 in favorable scoring conditions at Bellefonte Country Club.

“I’m pretty much happy overall,” Zaccheo said. “I left a few things out there, but I can’t complain about being 4-under after the first round.”

Sandhu, from Ashburn, Virginia, made a splash is his American Junior Golf Association debut despite three bogeys down the stretch that kept him from sitting atop the leaderboard. The impressive, not-yet seventh-grader birdied six of the first 11 holes to get to 6-under.

“I played the first nine holes great,” Sandhu said of his 31 on the front. “I didn’t finish out as good as I wanted. My goal for this week was just to play three rounds under par and see what happens, because that’s the best I can do.”

Sandhu’s skill set, poise and approach are well beyond his years.

“Mentally, Sihan is probably the same as any of the older players,” said his father, Ruby. “He understands the game. He’s been competing since he was six, so his golf acumen is very high.”

Expectations have been great since Sandhu burst into the golf spotlight at age 10. Playing in the U.S. Kids Golf 2016 World Championship in Pinehurst, North Carolina, he shot 23-under par to eclipse the old record by five strokes. Sandhu’s winning margin was 17 shots. He’s also fared very well in Europe.

Zaccheo, 18, tied for 14th at the Bluegrass Junior two years ago and wants to go out on a higher note.

“It’s nice to be back here,” he said. “I like the course and the competition. It helps you keep your game sharp going up against these kinds of players. You can’t take anything for granted.”

The former West Virginia Junior Amateur champion orginally announced Florida Atlantic as his college choice, but decommited after a coaching change there. Zaccheo spent the last year-and-a-half near Augustine, Florida, attending Allen D. Nease High School where he graduated this spring. He still has residence in Beckley, West Virginia.

Zaccheo’s highlight Monday came on the 13th hole. He rolled in a 40-footer for birdie to go 5 under.

“It was a huge, downhill left to right swinger,” Zaccheo said.

Another Kentuckian, Jay Nimmo of Benton, shot 68 and is two shots off the lead. A group at 1-under 69 consists of Alex Doss (Campbellsville), Cooper Parks (Campbellsville), Jake Davis (Gainesville, Florida) and Matt Camel (Greenwich, Connecticut).

Ashleigh Park of Irvine, California, leads the girls division at 2-over 72. Park, currently 133rd in the Rolex AJGA Rankings, made four birdies.

The field will be cut to a minimum of 50 percent after today’s second round.